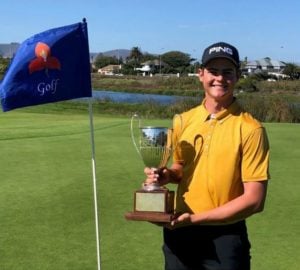 It is quite evident why Wilco Nienaber is South Africa’s No. 1 golfer.

Nienaber became the first golfer since Christiaan Bezuidenhout in 2013 to win the Western Province Amateur ‘double’.

His opening round of the Stroke Play Championship was almost flawless. With just one bogey, and five birdies in a row on the back nine, he carded an eight-under-par 62.

His position at the top of the leader board was never really challenged as he followed up with rounds of 69, 64 and 67 to win by three shots from Milnerton’s Luca Filippi.

It just so happened that Luca Filippi should be his opponent in the 36 Hole final match.

After beating Brandon Gildenhuys 2/1, Otto van Buynder 3/1, came back from 3 down to beat Luan Boshoff, and Cameron Johnston 4/3, Nienaber was one match away from the ‘double’.

Nienaber overturned a three-down score to finish the first 18 holes –  four up. With a hole-in-one in the mix, Wilco completed his match with two birdies to beat Filippi 3 & 2 in the 36 hole final at Milnerton Links.