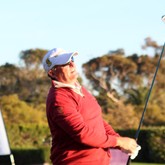 Lying just one shot off the leaders after Sunday’s first round, Williams opened and closed his final round with three consecutive birdies to win the WP Senior Masters at Strand Golf Club. With rounds of 71-68 (139), he won by one shot from Clovelly’s Jonathan Bernard.

Playing in the second last group with Jonathan Bernard and Rurik Gobel, Williams got off to a flyer with three birdies.  He did slip off the lead briefly with two bogeys on the 11th and 12th, but pulled himself back into contention with birdies at the 16th and 17th.

When Williams teed up on the 18th there were now three players sitting on four-under-par, Brian Mampies and Jonathan Bernard.

Playing in front of Williams, Rondebosch’s Brian Mampies’s third shot into the 18th green spun off the front. He narrowly missed his par putt and a potential spot in a play-off.

After Bernard carded a par, Williams slotted his twenty-five foot putt for birdie on the par 5, 18th for the outright win.

Marcus Manig, and Rurik Gobel dropped out of contention early on in their round when they walked off, the risk and reward par 4, 4th with a nine and seven respectively.  Gobel put two drives out of bounds, and Manig only found the green after six shots and finished with three putts.

With more bogeys than birdies, defending champion, Craig Poulton signed for a two-over-par 73-73 (146).

The WP Masters is the last tournament before the Seniors do battle again, this time when they compete in the Senior Inter-Provincial at Simola Golf & Country Estate 24-29 April.