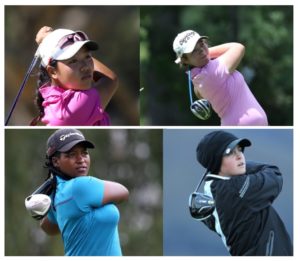 It was a tussle between Woo-Ju Son (Country Club Jhb) and Kajal Mistry (Randpark) at the 2017 WP Women’s Amateur Championships held at Rondebosch Golf Club.  Son took top honours in the Strokeplay event finishing one shot ahead of Mistry; and Mistry the Matchplay title.

Both players had outstanding performances in 2017 – will they repeat their performances tomorrow at the Women’s Amateur Championships at Bellville Golf Club?

Unfortunately, Mistry who claimed six, 2017 victories, which included the Sanlam South African Women’s Stroke Play Championship, and who was recently awarded the Women’s Golf South Africa Order of Merit title for 2017, will be missing from this year’s field.

Or Will Danielle du Toit take the trophies home? On-form, Danielle, who also received an Achievement Award at the Women’s Golf South African Awards, capped off her season when she became the 101st champion at the All India Ladies Amateur Championship in Bangalore, India.

Randpark’s Zethu Myeki is also a strong contender.  The WGSA no3 ranked player finished T3 in 2017, and was the Matchplay champion in 2016.

The Championship is a must for the country’s top ranked players as they search for national order of merit points, and ultimately selection to national teams.

There is a strong contingent of WP players. Boyed by their success at the 2017 Inter-Provincial they won’t be letting their provincial trophies go so easily.

They are led by WP No.1 Kaylah Williams (Bellville). Playing at her home club, she will want to add to her 2016 Ackerman Championship title.

Upcoming, Jordan Rothman, Durbanville’s Club Champion is eager to pick up her first provincial title.  With a one-under-par 71, she was the leading player in the 2017 SA Womens Inter-Provincial Seeding round.

It was in back in 2015 when WP player’s Cara Gorlei (Matchplay), and Amy Henning (Strokeplay) were victorious in this Championship.

The Championship is played over three days.  The 36 Hole Strokeplay takes place on Wednesday, followed by two days of Matchplay.