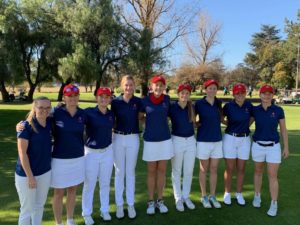 VEREENIGING, 3 June 2019 – Larissa du Preez and Gina da Silva made a perfect start in Gauteng North A’s title defence to lead the first round of the SA Women’s 72 Hole Teams Championship on Monday.

The pair combined for an opening total of one-under 143 at Maccauvlei Golf Club to open up a two shot lead over Ekurhuleni A.

“I am extremely proud of the way the two players managed themselves. Larissa struggled on the front nine, but she just kept grinding and made some birdies on the back nine for a 71. Gina had at least five putts that either lipped out or burned the edges, but she never showed any frustration and posted a very solid 72.

“Our third team member Karin Watts had a battling day. Karin posted a non-counting 84, but we give her 10 out of 10 for keeping the team spirits up and keeping us positive. We got the start we wanted, so onwards and upwards from here.”

Du Preez, a member of the victorious team that won the Swiss Team Trophy in wire-to-wire style at Waterkloof Golf Club last year, was delighted to save her round with some good putting on the back nine.

“I struggled to get going and I missed a lot of fairways on the front nine,” said the Silver Lakes golfer.

“When I did hit fairways, I made birdies or pars, so I kept the round going, but my ball-striking really improved down the back nine.

“I birdied 14 and 17 to get to one-under. At 14, I hit a great approach to a metre and I hit my second shot into 17 to two feet. I only had 28 putts for the round, but it could have been better if more putts had dropped.

“The course is in stunning condition and I can’t say enough good things about these greens. I’m really pleased that I could recover and come back with a bang. Hopefully I can find a few more fairways and get my irons on point for a couple of low rounds on Tuesday.”

The country’s leading amateur Kaylah Williams posted an opening 73 and former SA Women’s Amateur champion Jordan Rothman added 78 to put Western Province A in the mix in joint third on 151 with Gauteng B.

Meanwhile Danielle Bekker (76) and Nicola Schoeman (83) from Mpumalanga A set the leading pace in the Challenge Trophy with an opening score of 158.

Round of 80 from Kim Straus and Marlie Smit moved KwaZulu-Natal B into second on 160, while Nina Smit (79) and Isabella van Rooyen (85) combined for 164 to seal third for Western Province C.