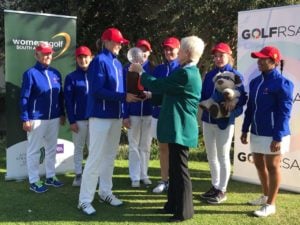 MOSSELBAY, 29 September 2017 – Western Province was ascendancy once again as they turned a final round assault on Gauteng into a glorious celebration at the 57th South African Women’s Inter-Provincial Championship at Mossel Bay Golf Club on Friday.

Skipper Kaylah Williams and her five charges showed incredible courage in the face of adversity to take on the powerhouse from Gauteng and pummel their opponents into submission with a 6 – 3 victory on the final day.

“This is a dream come true,” said the 15-year-old Williams. “It’s never easy to win all your matches at the IPT and we are over the moon that we pulled it through.

“This is what we worked for. We made sure that we never got ahead of ourselves, we played every game on its own merit and everyone played for the team. We are over the moon.”

Gauteng A headed to Mossel Bay as the favourites following back-to-back victories at Centurion in 2015 and Umhlali Country Club last year.

The defending champions exerted their dominance with a nine shot victory in the 36-hole seeding round. Western Province A finished second, Ekurhuleni tucked into third and host union Southern Cape sealed the final spot in Division 1.

After two days of intense battles, Gauteng led the standings, but Western Province A was right on their heels. The 2014 champions scored decisive victories over Ekurhuleni and Free State for four points and went into the final round clash just 3.5 games points adrift.

“We needed a huge push in the foursomes to have a chance; we basically had to win all three games and at least two more in the singles to win,” said Williams.

“After the foursomes, we started the singles as if we were still behind and that approach worked for us,” said Williams. “With three points in the bag, we needed two more points, but Gauteng had been really strong in the singles. We needed to dig deeper than in any other match.”

Kaiyuree Moodley beat Ashleigh Mills 4 & 3 to get Gauteng A back into the fight, but Williams routed Symone Henriques 5 & 4 to keep her team’s title hopes alive. Son, the country’s top ranked junior, whipped Fredericks 6 & 4 and South Africa’s number one Mistry mowed down Vicki Traut 6 & 4 to keep Gauteng A in the match.

But it was all too little, too late.

“We came to this year’s championship with the will to win and I am incredibly proud of what the team achieved here this week,” said manager Anne Roos. “All our players, with the exception of Vicki, came through the Womens Golf Western Province HPC Coaching Programme. They all started with us as juniors, so this is a fantastic celebration for the programme, the squad, the coaches and all our supporters.

“We prepared really well for this week and there is no describing what this means to the team. There were no stars on this team, just six players determined to succeed. Well done to Kaylah on a fantastic debut as captain and Jordan on an excellent first IPT and for winning the Individual Competition in the seeding round.

“We knew the final round against Gauteng A would be a dogfight, but this team showed incredible character throughout the week and I knew they had the stuffing to pull it off.”

Ekurhuleni defeated Southern Cape 7 – 2 in their final match to finish third in the standings.

Gauteng North A topped the Division 2 log after adding two points for their 7 – 2 victory over Border in the final round, while Gauteng B beat Boland 5 – 4 to take second in the standings.