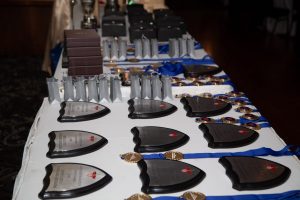 The who’s who of Western Province Golf gathered last week at the WP Golf Annual Awards dinner to celebrate the achievements of the province’s top golfers and teams. The evening showcased and celebrated their successes through out the year. The dinner was held at Kelvin Grove, Newlands.

The players and teams have been rewarded for their passion and commitment to the game and were acknowledged by their peers for their achievements.

Durbanville’s Jordan Rothman, the SA Sanlam Amatuer Champion, walked away the the Emerging Player of the Year award, with Steenberg’s Bobbi Brown, Breakthrough Player of the year.

The Royal Cape ladies were clear winners in the Scratch League – the first time in 27 years; and Durbanville Ladies did the double when they won both the Silver & Bronze Handicap league titles.

Team of the Year was awarded to the Premier IPT team as they regained their spot in the A Section after being relegated last year. It was probably the youngest ever team to represent Western Province at the Premier Inter-Provincial.