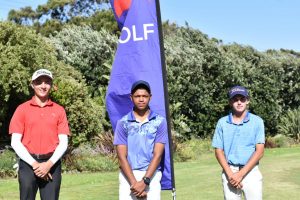 The 3rd event in the current WP Junior Golf Championship Tour was completed yesterday (11th January) at a windy KD Mowbray GC. All 3 events have been well attended with some great golf being played at terrific golfing venues.

Then yesterday, Liam Adonis (Atlantis) showed that his recent hard work has paid dividends by winning with a well played 70 – a round that included 5 birdies. Jack Buchanan finished 2nd on 71.

The U13s have played some super golf with Alex Utterson (Steenberg) recording 73 at Parow, an 81 at Kuils River and 73 at KD Mowbray. Henry Walters scored an impressive 74 at Parow and a winning 80 at Kuils River. Noah Muikanth recorded a fine 73 yesterday at KD Mowbray.

Appreciation to all the local golf clubs for being so accommodating and providing a secure environment to all the participants.

All the tournament scores can be viewed on the WP golf website together with the latest rankings.