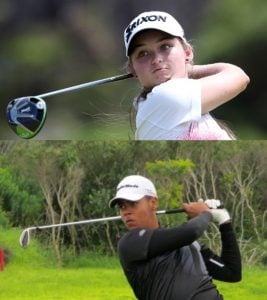 Four of South Africa’s rising junior talents have left for Indonesia to fly the flag for the country in the Himbara World Junior Golf Championships, presented by Ciputra.

Western Province’s Jordan Rothman and Kiera Floyd from Ekurhuleni will compete in the Girls Division, while Rorisang Nkosi from North West and Western Province’s Keyan Loubser will line up in the Boys Division at the Pantal Indah Kapuk Course of the Damai Indah Golf Club in Jakarta from 5 – 8 June 2018.

Rothman lit up the golfing radar last year when she dispatched former number one Kajal Mistry in the first round of the 2017 Sanlam SA Women’s Amateur Championship.

The 15-year-old from Durbanville Golf Club rose to prominence again when she won the seeding round for the 2017 SA Women’s Inter-Provincial and helped Western Province to victory at Mossel Bay Golf Club.

Rothman, who plays off one, has steadily climbed the WGSA Junior Rankings to eighth this season and will start in the Class A Division in the 15-17 age group for handicaps 11 and lower.

Seventeen-year-old Loubser from Bellville, who plays off a 2-handicap, enjoyed top 20 finishes in the WP Parow and King David Mowbray Junior Opens in recent months and took sixth overall in the Bridge Fund Managers Junior Series South Final, having qualified in Port Elizabeth in January.