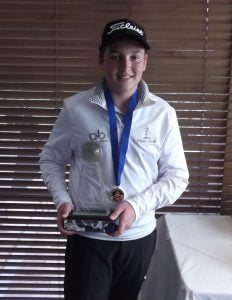 Despite having to contend with intermittent showers through out his round, 13-year-old Matthew Lotz (Atlantic Beach) became the youngest winner of a WP Junior Open, at the Steenberg Junior held on Sunday.

It was consistency that gave him the edge over the rest of the field.  With just three bogeys, and fifteen pars Lotz was able to beat the field by two shots.